Addendum: D. Kingsley Hahn on the Parker Timeline, circa 1983

As promised, here are scans of three pages from The ParkerPhile, February-March 1983, Volume I, Number 2, edited (and mostly written) by D. Kingsley Hahn.  This was a shortlived fanzine devoted to Westlake, that published once every two months and ran for five issues (this issue opens with a letter Hahn had received from Westlake himself, thanking him for his efforts) .

The issue at hand is composed of two folded sheets of good quality paper, eight pages in all.  I’ve finally gotten around to ordering the other four issues, haven’t received them yet.  I have only received his kind permission to post this particular article here, which I’m doing because I think it’s a first-rate bit of literary sleuthing, that does admirable legwork regarding the various bits and pieces of chronological information provided in the Stark novels (which as you will see, do not always match up).

As I said last time, we don’t want to get to obsessed with dates.  Parker is not meant to be taken that literally, but Westlake didn’t have to provide any dates at all, so obviously he did want us to have some sense of time passing in Parker’s world, as it was passing in his.

I agree fully with Mr. Hahn’s observation that the first sixteen Parker novels take place over a period stretching from 1962 to 1972 (Butcher’s Moon was most likely completed in 1972, based on comments Westlake made about trying and failing to write another Parker novel in 1973).  It’s 1962 when Parker crosses the George Washington Bridge, and 1972 when he drives out of Tyler.  They do not all take place the same year each was published in, and there’s a bit of authorly legerdemain regarding the dates, but it seems safe to say Parker has aged roughly ten years from the time we first meet him until the events of Butcher’s Moon.  And the books after that–well, that’s a bit more complicated, as I was discussing last time.

If you want to read more of The ParkerPhile, Mr. Hahn has some remaining copies for sale on eBay.  Now let me see if I can get these scans posted at a legible size.  I used to know how to do that.  Oh well, each era of amateur publishing has its own crosses to bear….. 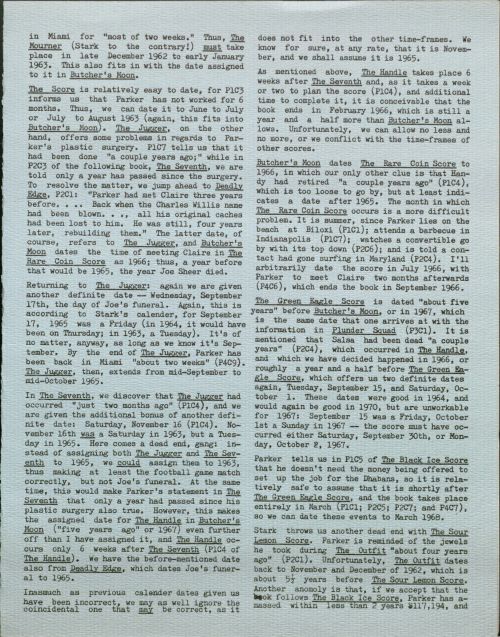 If these are too hard to read, try these links–

Thanks to Greg Tulonen for the technical assist.

27 responses to “Addendum: D. Kingsley Hahn on the Parker Timeline, circa 1983”