Mr. Reese and the Candids

It’s not hard finding images of movie stars online.  When putting together my recent piece on the seven actors I thought might have played Parker in the past, but never did, I had an embarrassment of pictures to sift through.  I picked the ones I thought got my points across best.

With one exception.  Tom Reese.  Born 1928, six feet three inches tall.  My personal favorite of the bunch.  By far the least famous.  (Compared to him, William Smith was an A-Lister.)  Call it my love of the underdog.  That’s an IMDb link, incidentally.  Google “Tom Reese, Wiki” and you get an article about a cricketer from New Zealand.

You can find the odd few screen captures of Reese, from this or that film, but the only one I could find from The Outfit was of very poor quality.  The others I found, relating to different roles, did not do him justice.  To be honest, most of his film roles did him no justice.  He fared somewhat better on television, where many a first-rate thespian eked out a living back in the day (and still does).  In no way shape or form could you call him a movie star.

I mean, when one of your career highlights on the big screen is playing an Oddjob style villain named Ironhead in one of those ultra-kitschy Matt Helm movies, and you have to pretend Dean Martin can beat you up–you get the picture.  Or you would, if you Googled around some.

(At least Harold Sakata got to knock Sean Connery around some before he took a dive.  Geez, Reese was asked to autograph these things.)

Hating injustice as I do, I ordered a brand new remastered DVD of The Outfit, which just arrived this morning.  I did some screen grabs, and from now on there will be decent pics of Tom Reese online.

In The Outfit, Tom Reese plays a hit man.  Whose name in the credits is “Hit Man.” He’s the first character of any note we see in the film’s opening scene, where he kills Macklin’s brother, while dressed as a priest (which makes no sense, like most of the film). He’s accompanied by another hitter, Frank Orlandi, played by Felice Orlandi.  But Reese’s character is the one that matters, the boss killer, who plans hits for The Outfit. 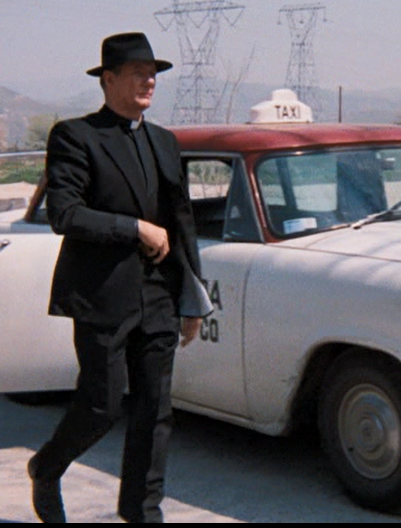 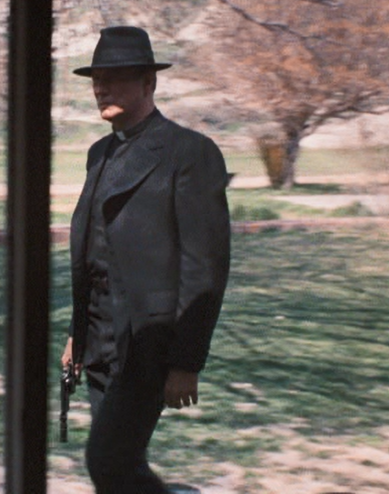 Reese and Duvall have no scenes together–Macklin isn’t interested in taking revenge on mere mechanics, seeing the organization itself as his target.  I suspect they didn’t have the budget to write more scenes for Reese, give him a name, motivation, etc–that way they’d have had to pay him more.  Their loss.  He gives the most interesting performance in this movie, far as I’m concerned.  (Okay, tied with Joe Don Baker, having fun with his second banana role.)

Reese comes on like a major player in every scene he appears in, somebody Macklin will eventually have to reckon with.  But for whatever reason, he’s treated as secondary (maybe more like tertiary) to Timothy Carey’s sneering over the top underboss.  Carey, who played small roles in a lot of important films, has something of an online cult, and maybe he earned that elsewhere, but not here.

“Hit Man” pops up again at a restaurant owned by Cody, the Handy McKay of this story, played by Joe Don Baker.  This time, he’s dressed as a hunter.  Suits him. 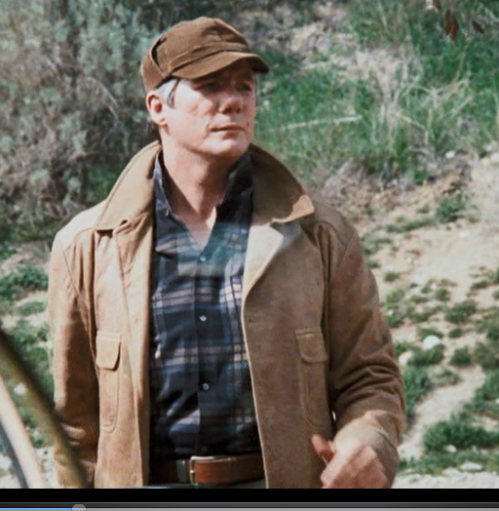 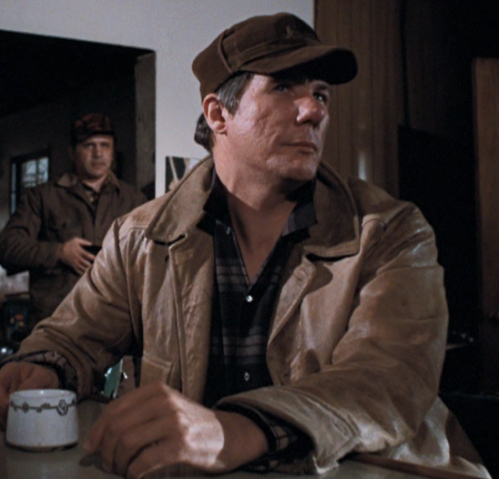 He and a different partner (played by former boxer Roland La Starza) are there to kill Cody, but because the local law is eating there, that gets called off.  Reese, realizing the game has to be called on account of cops, gets up to go, nonchalantly tosses a coin on the counter, walks out, pausing at the door to say–

“You know something, Cody, you ought to play the races.  You’re that lucky.”

No outward emotion.  He plays every scene, reads every line, 100% deadpan.  Not because Reese couldn’t do emotional reactions, if the director needed some.  He’s making a deliberate choice to keep it all inside.   You can see just a glimmer of annoyance when he realizes he can’t do the job now.  But he’s not frustrated.  If at first you don’t succeed…..

The attempted hit on Macklin, borrowed in a ham handed way from the novel, doesn’t involve Reese’s character.  They send Orlandi, without back-up, even though he’s nowhere near as good as Reese’s hitter.  (I mentioned this movie makes no sense, right?)

But as The Outfit begins to realize Macklin and Cody are a threat, they get the A-talent back in the game, and Reese is seen talking to a man outside the motel Macklin, Cody, and Karen Black’s Bett are staying at.  He walks off, a cheroot in his mouth, arms swinging at his sides, and I’ll say again–I don’t give a hoot what the credits say.  This is Parker! 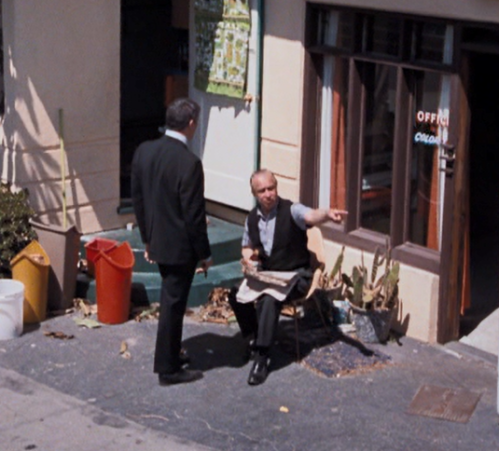 And after all that build-up, he is seemingly killed off in a perfunctory manner, almost as an afterthought, along with Carey’s character Menner and some other guy I don’t care about, when they use some bought cops to try and whack the independents out on the highway.  They come driving up slowly from the other direction, while the fuzz have them distracted, and you can just barely make out Reese in the back seat of the car. 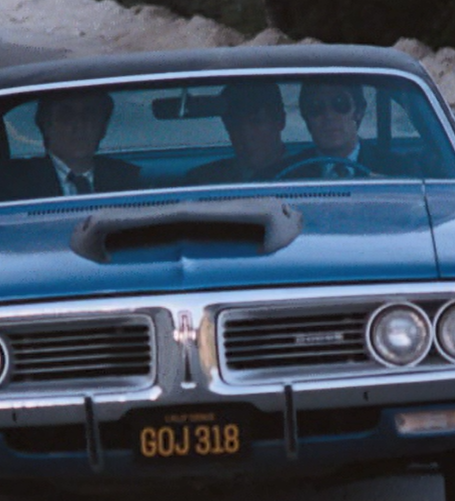 As they close in for the kill, you see Hit Man’s gun (same one he used on Macklin’s brother) stick out of the rear window–it’s a terrible position for him to be firing from.  You can sort of infer what happened, if you read between the scenes–he found Macklin, scouted the terrain, planned the hit, but Menner, looking for revenge, forced his way in, took it over, screwed it up. Kibbitzers.  They’ll get you ever time.

Macklin and Cody, having neutralized the cops, respond with superior firepower, the Outfit car goes off the road, turns over, bursts into flame–after Menner comes out shooting, with predictable results.  Bett gets killed in the crossfire.  You don’t see Reese or the other guy at all.  The implication is they’re unconscious/dead, and will get burned to a crisp, leaving an interesting puzzle for the real law when they show up.

Macklin, now having both his brother and his girlfriend to avenge (::sigh::) will mount an improbably successful attack on Mailer’s mansion (they do not reconnoiter before moving in, like Parker and Handy), then drive away with a wounded Cody in an ambulance, yelling “The good guys always win!”  Yeah, but you didn’t win any money, did you?

Flynn later explained that an MGM exec insisted on an ‘upbeat’ ending.  Which sounds a bit odd to me.  The end of the novel isn’t at all depressing.  It’s one of the most upbeat Parker novels I can think of.  Parker and Handy kick ass and get paid.  Nobody they like gets killed. I don’t know if Flynn’s story means Cody originally died in his script, Macklin went back to jail, or they just had to throw in the good guys joke at the end to send the audience out happy.  If it was either of the first two, I’d say the suit was the good guy here.

I know I’ve been very down on what is, for many, a classic of the genre (and a movie Westlake is known to have called his favorite of the Parker adaptations–I have my own opinions as to what he meant by that).

For me, it’s an exercise in frustration.  This could have been something amazing, if the script wasn’t so lousy.  Great cast, great atmosphere, great cinematography, great music.  Flynn does a fine job coordinating all this; he knew how to do that.  But he just had to write it himself, didn’t he?  Be the auteur. He didn’t know how to do that.  Anymore than Menner knew how to plan an ambush.  Kibbitzers.

After the shoot out on the highway, we never see ‘Hit Man’ again.  There’s never any direct confirmation he’s dead.  He and Macklin never once eyeball each other, even though he was the one who got the whole story kickstarted, before we ever laid eyes on Macklin.  It’s a very unsatisfying conclusion to a character arc.  If you want to call it that.

Here’s what I say happened–I’m imagining a post-credits scene, which they didn’t have very often in the 70’s, but what the hell.  Hit Man gets out, after Macklin and Cody (and the now deceased Bett) drive away, before the car explodes.  He dusts himself off.  He walks away calmly, arms swinging at his side.  He bides his time, makes his plans, no amateurs this time.  A few minutes after that ambulance leaves the mansion–well, turns out the good guys don’t always win.

I’m allowed to be prejudiced on my own blog. In a good cause.  Giving an honest workman a bit of overdue credit surely qualifies as that.

And speaking of honest workmen–hello, John.  You seem upset.  What’s that you say?  Fourteen straight posts about the other guy?  Fancy that.  Funny story, I actually reread your book like a month ago, but the other thing kept expanding, and I figured you could wait.  Save the best for last, you know?  Technically, Ask The Parrot was better, but your final outing is quite interesting.  I just have a few more things to say about the finer nuances of the Starkian aesthe–I beg your pardon?  You want your review now?

John, I’m sorry you’re upset, but you must recognize, I’m in authority here. Anyhow, what are you going to do about it? Everybody knows you never hurt anyb–oh.  Hi Tiny.  Didn’t see you looming in the shadows there.  You move quiet for a big guy.

No, I would never want to be rude, Tiny.  Proper etiquette is the driving force of my existence.  Ha, that’s a clever pun.  Yes, I heard the story about what you did to that procrastinator who annoyed you.  I know all those stories.  I should probably start working on that review now.  Good seeing you guys.  Regards to May and Josie.  Tiny, please don’t slam that–damn.  Better call the locksmith.

Well, no point putting it off any longer, folks.   All good things must come to an end.  Time to get real.

21 responses to “Mr. Reese and the Candids”