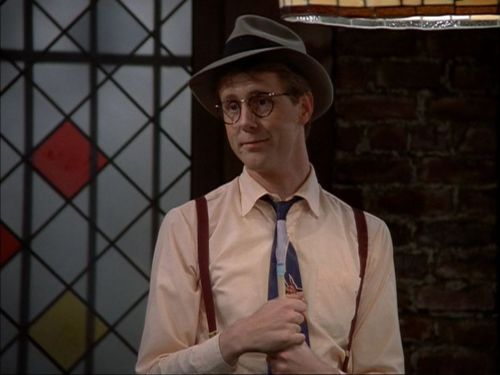 My main reaction was “What a waste of talent.”  Yeah, he had a great guest run on Cheers, Night Court was sometimes worth watching, but this is somebody who should have been playing Westlake Nephews, Block grifters–maybe not dark enough for Thompson’s.  Just offhand, I could head cast him quite easily in Block’s Lucky at Cards.

I’ve read I don’t know how many good crime novels where he’d have fit like a glove.  He was raised by a grifter mom, and though he opted for a somewhat more settled life, he clearly enjoyed the ride, learned from it.  He may not have played grifters that often but he knew that life from the inside.

However, like any good con man, he knew how to project a certain bland innocuousness–maybe that was really him, how would I know?–and nobody ever took a chance on him outside the world of sitcoms.  He didn’t seem ‘noir’ enough. And since he claimed he wasn’t really an actor (sheahright), he was less likely to get the heavy roles.  He did fine with light ones.

Watching him back in the 80’s, I saw a mind that said “You know, I like you pigeons.  I don’t want to take you for everything you’ve got.  Just getting by, enjoying the game.  But you know, you really shouldn’t believe a guy who promises you a solid gold watch for a dollar.  I worry about you guys.  You’re too easy.  Smarten up, suckers.”

And you know, Harry, we really should have listened.  Let’s listen again.  (For reasons no doubt known to The Law, the first video I posted has become unavailable.  Here’s two more.  This YouTube scam is great!)