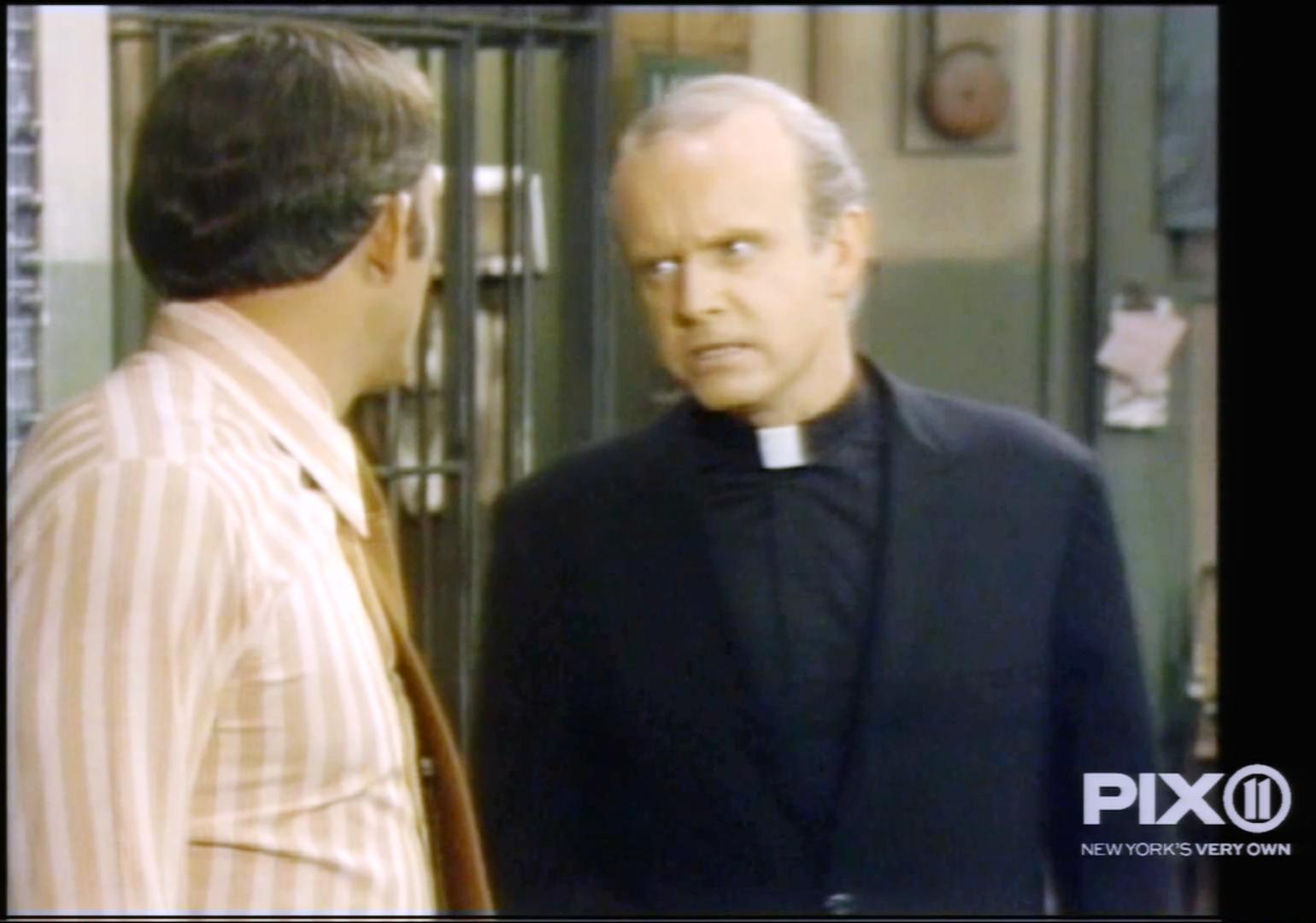 Living a Dortmunderian life, I’ve struggled to get back to my Dortmunderian blogging. It’s not that I have nothing to write about, I just struggle for the time and concentration to get the work done. So many distractions from what was once my most pleasurable distraction from the quotidian exigencies of daily existence (I mentioned my life was Dortmunderian, did I not?)

So just to write about something, and remind myself it’s possible–how come none of the Barney Miller fans among my regulars ever brought this up?

It used to be very hard to watch Barney Miller in syndication With the advent of old people cable channels selling dubious life insurance policies, reverse mortgages, and of course pillows made by crazy men, what’s left of us Boomers can revisit all kinds of blurry childhood memories–but because I live in Gotham itself, I can actually watch my favorite sitcom cops on WPIX. (WPIX still exists! I passed their midtown offices just the other day!) The picture quality is a little better, and the commercials a mite less depressing.

For a while there, Herself (also a fan) and myself were binge-watching; lately it’s more hit or miss. But some weeks back, I recorded an ep I had no past recollection of, and at some point I realized I was in the presence of a subtextual Westlake homage.

The Brother is just a run-of-the-mill ep where various oddball personages descend upon the 12th to perplex the good officers with their varied quirks and conundrums, always with Barney in the background, dispensing wry homespun wisdom like a Solomon come to judgment, but without threatening to bisect any babies. (I presume that would be illegal now.)

Only one of the plot threads need concern us–Brother Thomas Kelvin, a stern-faced older man dressed in clerical garb files a missing person report with Wojciehowicz (I shamefully admit I copy/pasted the name from Wikipedia). A novitiate has gone missing from their hotel, just before they were going to catch a train upstate.

The good brother (Not a priest! Don’t call him Father! He hates that!) hails from a monastery in the Adirondacks–the order of St. Dismas. He is not asked to to explain who St. Dismas is, which I suppose is reasonable enough, since it doesn’t in any way impact the case–except wouldn’t Dietrich tell everyone anyway?

You’d expect a brief hagiography lecture from the 12th’s resident know-it-all, but Dietrich is sadly distracted in this episode by learning to his deep distress (I can’t offhand think of an ep where he looked sad for such a protracted period) that he can’t credibly pose as a woman to entrap would-be muggers. Just shortly before this, he was happily asking a befuddled Barney which silk scarf would go better with his new ensemble. Scarlet or wheat?

(And there’s a subplot involving Inspector Luger feeling lonely and bending Barney’s ear about it, but that’s basically every ep, right?)

Turns out, finding himself amidst the infamous fleshpots of Gotham, the young man experienced a sort of secondary vocation, centered around getting laid prior to renouncing worldly pleasures. He had encountered one of the many good-natured and appealingly blowsy young courtesans that one finds in many a Barney Miller episode (and so rarely in real life, which as we all know is greatly overrated).

They were just about to commence with the deflowering when the authorities rudely interrupted. The working girl even imputes she might not have charged for her services, which is really twisting the knife. Wojo, ever sympathetic to the mating urge, slyly arranges for the novitiate to proceed with his initiation, while Brother Kelvin and the others head north. We never learn which vocation won out in the end, but he had a nice vacation either way.

Decent enough outing, for the late run of this show. They had lost a few too many key cast members by this point. (I like Levitt, who doesn’t, but his height insecurity and desire to ditch the uniform for plainclothes were no substitute for Fish’s endless kvetching, or Nick’s horrible coffee.)

Leaving that completely irrelevant fan-bitching aside–what makes me so sure this is a Westlake homage? Good Behavior, which prominently mentions the penitent of the two crucified thieves, was published in 1985. This episode was aired in October of 1979. How do we know Westlake wasn’t homaging Barney? Seems a fair bet he watched when he had the time.

Ah, but that was the second instance of Westlake namechecking the light-fingered saint. The first was in Brothers Keepers, published in 1975, and reviewed by the Times in May of that year. Meaning that the TV scribes had at least three years to get around to it, and get just a teensy bit light-fingered themselves. (Not that the storylines match up terribly well, and if they had, no doubt the legal department would have insisted on a different saint).

And as you all should know, Brothers Keepers involves a young Catholic brother who himself takes a sexy sabbatical with a beautiful young woman, though she’s not a pro, and they’re in Puerto Rico, which I’m pretty sure qualifies as a dispensation. I’ll check with my confessor later.

But more to the point, one of the denizens of the equally fictive Crispinite order in that novel used to be a criminal himself, briefly belonged to an order of felonious monks (Westlake hated giving up that jazz-based pun that was going to be his title, but found he respected his monks too much to make them into crooks, even of the comic variety). They chose St. Dismas as their patron, and according to Brother Silas, this monastery was nothing more than a heinous hideout created by ex-cons to go on being the same irreformable reprobates they were before.

So there is my case, ladies and gentlemen of the jury–but being an honest prosecutor (I’m sure there must be some), I must mention one piece of evidence that might argue for an alternate explanation. There is in fact a Church of St. Dismas in upstate New York, if not a monastery. And if you’d believe it, it’s in none other than the picturesque hamlet of Dannemora. Westlake country par excellence. And the setting of yet another of his Nephew books, that was published in 1974. (But seriously, whoever named that church had a Westlakeian sense of humor, so I think my case still holds water).

One more observation I must relate, though–see, the writers had to find a way to justify the 12th going to look for the missing monk trainee. He hasn’t been gone anywhere near 48 hours. Brother Kelvin, determined to get his inductee back, insists he may have been abducted by deprogrammers, anti-cultists–there were some suspicious characters hanging out in the hotel lobby. Wojo says “But you’re the Catholic Church.” Kelvin says that to some people they’re just the nuts on the hill. The parents may have objected to their son’s vocation. It’s enough to keep the story moving. If you don’t think about it too much–never a good idea, even if you’re watching the best sitcom ever, which Barney Miller very nearly is.

But you know how Westlake was–always scavenging ideas he felt hadn’t been given a good enough shake. Suppose somebody had a sincere vocation, joined a religious order–maybe a convent this time–and suppose her father was a rich bastard who objected to this, had her kidnapped, hired a deprogrammer specializing in cultists to talk her out of it? And as it turns out, the Brothers of St. Dismas, while not committed to a strict vow of silence, minimize vocal communication as much as possible when at the monastery (this perhaps explains why Brother Kelvin never stops gabbing for most of the episode, but has little aptitude for pleasant conversation). Probably they write notes instead.

It’s just a thought. I still have them, sometimes. I have some more, about a mystery writer I just recently discovered, who has openly confessed his debt to Westlake–most specifically, to Richard Stark. He’s published three crime novels thus far. I’ve read them all. Also something with a ridiculous number of swords in it. We won’t dwell on that one much.

There see? I can still write. If you want to call it that. Let me limber up a bit more, and maybe I can get up to speed again. In the meantime, you can easily watch The Brother on Video Dailymotion, if you want to form your own opinion of its provenance. But man, if you thought the old people cable channel ads were depressing………